In this article, I reflect on southern front porches, black feminist geographies, and sacred space in the wake of Baton Rouge police storming protesters on Lisa Batiste’s front porch.

“We believe in the revolutionary things that happen on a southern front porch.”

It was mid-December, but that affirmation hung in the air like humidity in July. Three and a half-years prior, on May 29, 2012, Women With A Vision (WWAV) had been made home-less, after still-unknown arsonists firebombed and destroyed their New Orleans offices. On October 19, 2015, this quarter-century-old black feminist collective walked into their first home since the fire, complete with a sprawling front porch that emptied into Broad Street’s foot traffic. We christened that front porch with a  conversation about the word “resilience,” that dubious slogan of the city’s official Hurricane Katrina 10th anniversary celebrations. What exactly did resilience mean when 99,650 black New Orleanians were still displaced, and thousands more were living in prison cells as a result of intensified policing? “Oh, right…”

As the rush hour traffic crawled by, we reflected on the vital work that WWAV was doing to hold the experiences black women–especially those born and raised in New Orleans–as relevant and important. We imagined how bring these stories to the forefront could help to expose the battle for space and history actively underway in the new New Orleans. When we took this picture, WWAV’s Executive Director, Deon Haywood, had just claimed the front porch as a site where this organizing could take place and have a place–where revolutionary things happen. That affirmation prompted the recollection of another in WWAV’s history. Twenty-five years ago, WWAV was just an idea, thought up by eight black women on a front porch in Central City.

I have been a partner to the WWAV family for nearly a decade now. As a doctoral student at Columbia University, I’ve spent the last four years designing, researching and (now) writing a collaborative ethnography of activist persistence alongside my WWAV colleagues. Together, through an amalgamation of oral history, collective storytelling, and archival tracing, we’ve been working to document the ethics of survival, struggle, and renewal that guided WWAV’s work from their founding in the early years of the AIDS epidemic through to their present in the post-Katrina new New Orleans. What’s mattered most? Space. Specifically, front porch space.

As a scholar of religion in America, space has long been a critical analytical category for understanding how something we might call “religion” is produced through and productive of embodied and emplaced encounters, contests, and practices. Throughout U.S. history, the power to delineate where the sacred could dwell has shaped the mass migration of millions across the expanses of the U.S.’s borders, as well as the steady movement of many more within the streets and passages of their home communities. This is hardly a romantic story. The paths along which the sacred has been made to flow were often lined with the blood and chains and blankets of settler colonialism and chattel slavery.

Space (both physical and epistemological) for those under siege has been prefigured by this history of violence and is also irreducible to it. It matters that black churches could become indisputable sites of autonomous gathering, sustenance, and worship amid the terror of Jim Crow. But it is no less significant that the story of religion in the long Black Freedom Struggle is so often, even if unwittingly, told as a churched story. In Civil Rights-era New Orleans, the persistent pressure of a tight respectability politics may have created a fault line between the churched black middle class and the un-churched “blues people” (c.f. Rogers, Woods), but churches were hardly the only spaces of religion and struggle in town.

My work with WWAV has continually pressed me to ask: What is at stake in privileging the institutional power of churches? What categories of the religious become seen as credible and acceptable? What falls out? Whose leadership is being prioritized Whose is relegated to the realm of “influence” between Sundays? Who isn’t even sitting in the pews?

During a car ride retracing old outreach routes, WWAV’s co-founder Catherine Haywood explained to me, “WWAV can’t do outreach the way we used to anymore.” After the storm, with tens of thousands of people still displaced, the housing projects WWAV worked in were demolished. The people who were able to return to the mixed-income units erected in their place were rarely, if ever, surrounded by the familiar faces of their previous residences. People were shaken up and scattered across redevelopment projects, in a sort of intentional chaos reminiscent of forced removal under the Group Areas Act in Apartheid South Africa and through Urban Renewal in U.S. cities before that. Furthermore, an array of restrictions, including caps on how many people could congregate on a front porch at once, directly thwarted efforts to build community anew.Front porches are where the WWAV foremothers gathered to make harm reduction and wellness packs for late-night outreach.

As Ms. Catherine attested and Brentin Mock recently penned, the policing of front porches in the new New Orleans is about controlling and regulating the sounds and sights and movements and rituals of blackness–indeed, the possibility for black life–in the city. I contend that this policing is also specifically an attack on the sanctuaries of black feminist leadership. Front porches are interstitial spaces, between home and street, between public and private. Black women have been building community and sharing truths there for generations.

On Sunday, July 10, 2016, the threat of front porches as black feminist organizing space was shown to the world. Six days prior, Baton Rouge police murdered Alton Sterling outside of a convenience store. Protests since had been unrelenting. Sunday was a huge day of mobilization. Hundreds of people statewide joined the local organizers in a march that first converged on the state capitol building and then headed towards the site of Alton Sterling’s murder. While en route, protesters were blocked and forced to retreat by a heavily armed police line. In the midst of the standoff, Lisa Batiste invited protesters to find safety on her front porch. The police then stormed Ms. Batiste’s front porch to arrest protesters. The cries audible on cell phone recordings offered the defense that protesters were on “private property.” And they were. They were also on hallowed grounds. The police were not simply stopping a protest; they were exacting violence against the past and present of black women’s geographies of struggle.

…that geography and Black women have always functioned together and that this interrelated process is a new way to ‘enter’ into space (conceptually and materially), one that uncovers a geographic story predicated on an ongoing struggle (to assert humanness and more humanely workable geographies).

To explore the power and potentialities of black women’s geographies, McKittrick draws on Jamaican writer and cultural theorist Sylvia Wynter’s conceptualization of the demonic. The demonic, etymologically speaking, describes a spirit capable of possessing a human. While the demonic has been imbued with myriad layers of religious significance and (de)valuing, it is also a term employed by physicists and computer programmers to signify a working system with no determined or knowable outcome. Taken together, these definitions of the demonic invite us to contemplate a system (geographic, social, or otherwise) that can only unfold when uncertainty and/or the supernatural is present.

To speak of black women’s geographies as demonic grounds, for McKittrick, is to attune ourselves to the persistent “absented presence of black womanhood” in our current world, a presence that is at once “too alien to understand” (Lorde) and nonetheless integral to the entire system. It also enables us to explore the ways in which black women’s unofficial or oppositional geographies–even while they are dismembered by politicians, restricted by property managers, and stormed by police–nonetheless hold a potentiality beyond the artificial poles of resist/submit: that of futures that are impossible to predict.

“We believe in the revolutionary things that happen on a southern front porch.”

In mid-December 2015, WWAV affirmed a generations-old, distinctly southern black feminist practice of respatialization. They claimed the historic importance of southern front porches as ritual sites, much in the way we are accustomed to thinking about (the making of) sacred space. However, while the “absented presence” of front porches in discussions of black southern sacred space may press us to locate front porches geographically, we should be cautious before subsuming front porches under the master category. When we pay attention to how WWAV systematizes front porches as black feminist geographies of struggle, we hear their emphasis on chance, on the potential for revolutionary things to happen, on the uncertainty of what that change will breed. In this way, WWAV’s theorization of front porches resonates far more profoundly with McKittrick’s (and Wynter’s) concept of demonic grounds.

Over the last seven months, WWAV has unfurled their affirmation of front porches as sites where revolutionary things happen into an active place-based practice of saying, thinking, living and writing black feminist geographies. Through a visual series of porch-talks, porch-sits, and porch-poses, WWAV has been bringing together longstanding New Orleans networks, as well as occasional national and international visitor, to unveil, develop, trace, and transform front porches as contested sites of struggle in the new New Orleans. Their work conjures the pasts of the WWAV foremothers, and of those women who came before them. It also exposes the horizons of a radical otherwise.

In this way, these porch-talks, porch-sits, and porch-poses are systematic strategies–for repairing and resurrecting the city, for imagining and emplotting new futures, for realizing more workable human geographies. In conversation, by taking up space, WWAV is sedimenting the traces and genealogies of pre-Katrina New Orleans–and redefining the terrain (indeed, possibility) of struggle in the process. As a method, it is nonlinear and nondeterministic; it is unpredictable and uncertain. But therein lies its power. 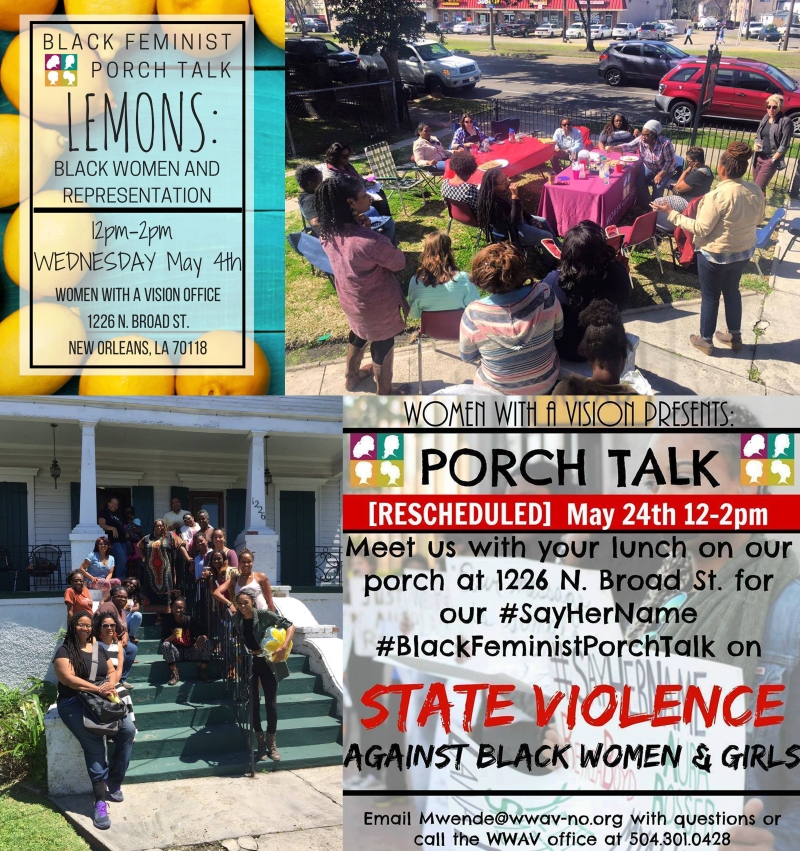