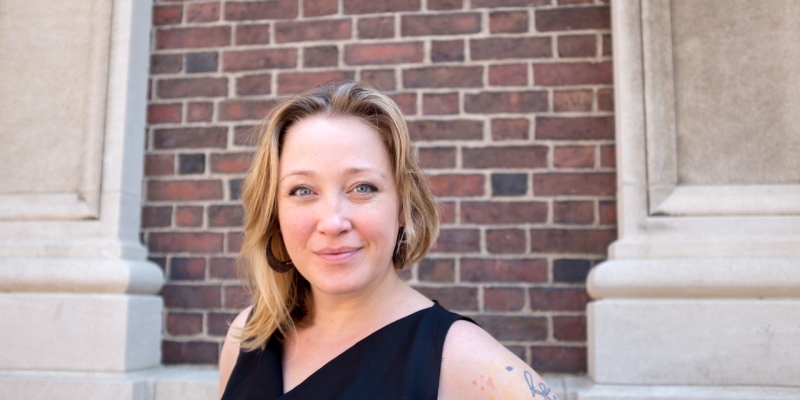 Where did you grow up?

I was born in Baltimore, but I “grew up” in the Philadelphia movements to end AIDS and prisons.

What drew you to your field?

Reading the work of philosopher, theologian, and priest Gustavo Gutiérrez. I first encountered his writings on liberation theology when I was in my late teens and early twenties. I was blown away. Gutiérrez took all of the Catholic sacred texts that I had been steeped in since childhood and showed me how they could become windows into entirely different ways of being—how a line as simple as “Blessed are the poor, for theirs is the Kingdom of God” could be read as proof of God’s “preferential option for the poor” and as a mandate for living faith through liberation work in the here and now. That was life changing for me. I now engage “texts” such as front porches and prison letters, but I still read them (as Gutiérrez did the Beatitudes) as archives of the past that press on our present demanding justice.

How would you explain your current research to someone outside of your field?

We need more stories. Stories that are not in history books. Stories about the intimacies of struggle. Stories that are told in hushed voices around kitchen tables after supper. Stories that are shared while passing time waiting for the bus. Stories that have been banished to the recesses of prison cells. Stories that make us dig down into the present and understand that we are, indeed, “the ones we have been waiting for.” How do we speak these stories? How do they speak us? How do we turn them into lessons about organizing and about power? How do we learn from the generations-honed work of building independent forms of knowing and thinking amid constant surveillance? How do we carry forward the seeds for transformation that have already been sewn?

What is your favorite thing about being a student at Columbia GSAS?

As an activist and scholar, my research brings the theories of knowledge already unfolding on the ground into substantive conversation with those crafted through academic modes of inquiry. It’s a two-part process that doubles back on itself. First, I work in collaboration with my activist colleagues to craft urgent questions that arise directly from their lived experiences and expertise. Together, we raise then these questions in critical conversation with allied scholars to find answers. And then through these answers, we identify new directions for further interdisciplinary scholarship. In my time at Columbia, I have found colleagues who move similarly in the world, and will be part of my work for the rest of my life. I also have been challenged by people who worry that I am too close to the ground, that “activist scholarship” can never be rigorous enough. These people have pushed me—to write more clearly, to slow down my arguments, to find the words to explain why “because my life depends on it” beats “IRB approved” every time. After six years, I am a better scholar for it.

Is there a common misconception about a topic in your field that you wish you could correct?

I am in the process of starting a blog called Where’s the religion? It’s the number-one question I am asked about my work, and I always turn it back on folks: “Where do you think the religion is?” These are the everyday moments when we all participate in producing an idea of what religion is and what it is not. For my part, I view the study of religion as an invitation to a particular kind of conversation. If you have ever watched the oldRudolph the Red-Nosed Reindeer cartoon, then you know about the “Island of Misfit Toys.” That’s what religious studies is for me: where all the things that weren’t respectable enough were sent by the secular academy.

What do you consider your greatest achievement?

I would have answered this question differently before June 22, 2014. Before then, I might have described specific teaching moments. But, wow, has it been awesome to become an aunt—and then to become an aunt again on September 29, 2015. Norah Elizabeth and Eva Meher are the two coolest humans I know.

Who is your hero of fiction?

Lois Lowry’s The Giver remains one of my all-time favorite books. There is something about the image of truth peeking through the drab like a flicker of color that has become deeply (and enduringly) metaphorical to me. Whenever I get stuck as a writer, I come back to the image of Jonas crossing into Elsewhere to give back the Community’s memories.

Who are your heroes in real life?

The HIV activist and prison advocate John Bell was my first partner in crime. Together, we founded TEACH Outside, Prison Health News, Beyond the Walls, The Institute for Community Justice, and a host of other projects at the intersections of HIV and imprisonment in Philadelphia. When we were teaching together, we would always make people come in for interviews—not because we turned anyone away, but because we wanted to see them and we wanted them to see us. A year or so into teaching together, a man showed up for an interview. John asked him, as we often did, “Why do you want to take our class?” The man replied, “My caseworker told me that you’d teach me about my rights.” John was open to just about anything, but someone throwing around his caseworker instead of talking about himself? John didn’t miss a beat before firing back, “F**k that. Half of your rights haven’t been written yet because you haven’t been here to demand them.”

Whom in your field do you consider a role model?

Mary Frances Berry. Her book on Callie House and the Ex-Slave Association is my touchstone on how research on grassroots poor people’s movements can upend deeply held scholarly interpretations. In a time that scholars have long said was all about W.E.B. Du Bois and Booker T. Washington, Callie House was riding the rails to organize 500,000 formerly enslaved black people to petition and then sue the federal government in the first ever national case for reparations. Mary Frances Berry has said it many times: history teaches us to resist. The job of public intellectuals is to keep telling these hard and life-giving stories, most especially in dark times like the ones we’re living through now.

What music have you been listening to lately?

I think every PhD student has a mixtape. For orals, my best friends in New Orleans made me a mixtape of Jill Scott’s “Golden,” Chaka Khan’s “I’m Every Woman,” and Drake’s “Started From the Bottom.” That’s what I tune into whenever I need to be reminded of why I’m here, what I’ve set out to accomplish, and how far I’ve come.